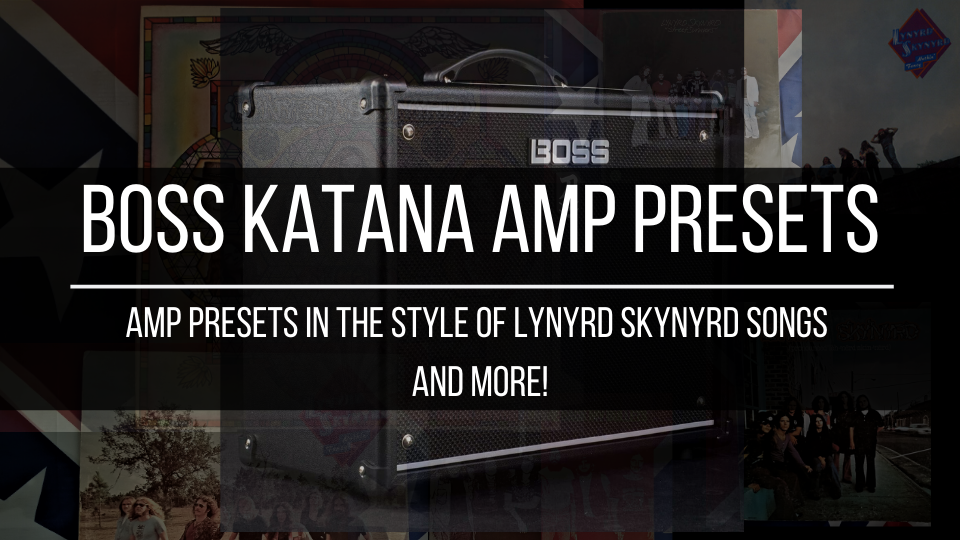 TONE PRESETS FOR YOUR BOSS KATANA

Currently, the following tones are available:

More tones coming soon - check back for the next version update!

The tones in the list will constantly be updated and added to as Tom creates them.

SUPER LEAD 100 - A 1968 Marshall Super Lead amp tone. Used often by Lynyrd Skynyrd on the early albums as well as many other great Classic Rock and Southern Rock bands.

VOX AC30 - Classic VOX tone in the normal channel of the amp. Modeled after a VOX AC30 that I played with on the Carolina Country Music Cruise (CCMC). I had a RAT pedal that I was using and the tone was drool-worthy.

'65 TWIN REVERB - A Fender Twin Reverb that is legendary among many classic rock players. This amp was used by Ed King to achieve his famous intro tone for Sweet Home Alabama as well as other songs like Swamp Music and I Need You.

TWEED BASSMAN 410 - Simulating a Fender Bassman 4x10 combo. This baby is a country rock and blues powerhouse. It fires out thick and driving blues tone but also cleans up real good.

JC-120 - Based on a Roland Jazz Chorus. This amp is the cleanest of the cleans and is one of the reasons jazz players LOVED this amp. Great for getting a good Steve Gaines tone as well.

BOOGIE LONE STAR - Based on a Mesa Boogie Lone Star amp. The Lone Star is a fantastic blues amp that I played through on the Carolina Country Music Cruise. It costs $2500 for a 1x12 combo and IT SOUNDS LIKE A MILLION BUCKS. I am simulating the settings I would have used on the cruise - FAT channel. It yields a thick and rich tone that is very bluesy and woody sounding.

BOOGIE RECTIFIER - Based on a Mesa Boogie Rectifier. Popular amp model in the 80s.

RECTIFIER MODERN - Based on a 2000s model Mesa Boogie Rectifier. This one features a different shade of gain when compared to the vintage Rectifier.

HIWATT DR-103 PT - Based on a Hiwatt DR-103 with a 4x12 cabinet as used by Pete Townshend of The Who. This preset is designed to get you as close to that Live at Leads Pete tone as possible. The amp is notoriously clean and has the capability of achieving a really creamy drive tone.

DR-103 PT LEAD - Same setup as the Pete Townshend DR-103 but models Pete's lead channel as used in 1970-71 for Isle of Wight and Live at Leeds. Features a distinct fuzz pedal that sounds just like Pete playing his signature leads.

This class is ONLY available to SKYNYRD ROCKER ALL ACCESS PASS Members. To purchase an ALL-ACCESS PASS CLICK ON THE BUTTON BELOW.