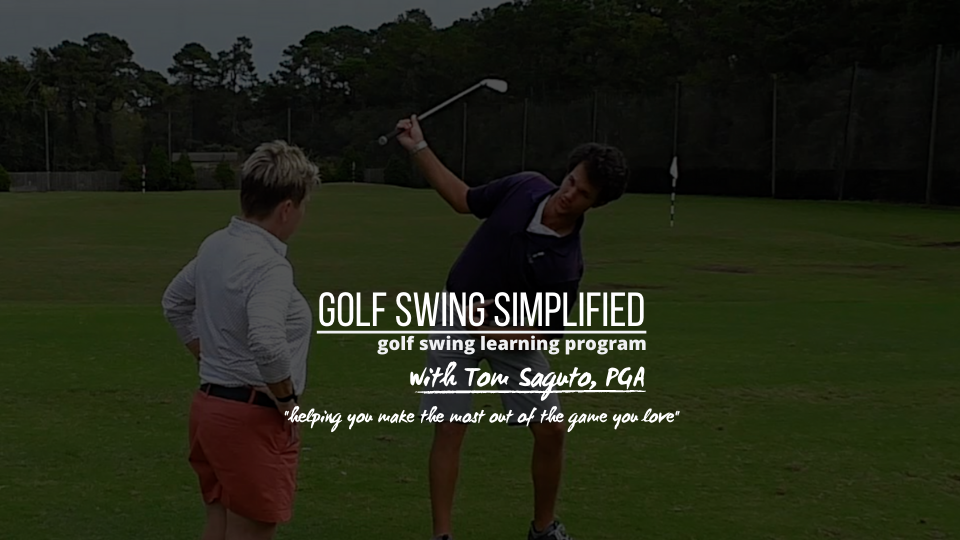 "Tom is the best instructor on the internet. He teaches a simple, repetitive swing. Simple methods for chipping and putting. I signed up for his online course- very affordable and TONS of great, simple, SHORT, lessons. I have improved SIGNIFICANTLY, and I'm playing the best golf of my life. I have made more birdies in the 6 months that I have been following Tom, than I did in the 20 years prior to finding him. I am dead serious. Check him out!!" – Michael M.

WHAT'S IN THE MEMBERSHIP?

There are TONS of features and benefits to being a SagutoGolf school member. As a member you receive access to:

WHAT OTHER GOLFERS ARE SAYING:

Hey Tom, I hope you see this. Shot a 73 this morning just two strokes from my age of 71! You are the best thing that’s happened to my golf game!! Believe him golfers and golfettes it works! - Jack G.

"Before I found Tom, I was pretty hopeless at golf. I was always the worst player when I played with friends and it was embarrassing every time I played. I was about to give it all up, even though I love the game, but then I came across Tom Saguto.

Over the years I've spent thousands of dollars on golf coaches and online golf programs. None of which really helped (and sometimes actually made my game worse!). I was resigned to thinking I was just pretty crap at golf and would never be any good.

But Tom's online courses changed all that. I bought Tom's online course two weeks ago, watched his easy to follow videos and practiced everything he showed me at the range. I'm 53 years old and don't have the flexibility I used to have but that doesn't matter with Tom's technique. Now I've gone from being the worst player in my group to being one of the best!

Every part of my game has improved 1000%, especially my pitching and chipping, and I'm crushing it with my Irons! I've never hit the ball so far and so straight! And it's all thanks to Tom!

Thanks Tom. You've helped me love the game again and I thank you for that from the bottom of my heart."

"I got back from my annual golf outing yesterday with the same group of guys that I had been going with.  I had not told any of the group of my swing change prior to the trip nor had I played with any of the guys since switching in March.  For reference, my typical score on these trips would be between 105-110.

Tom, because of watching your videos. I shot an 87 on day 1 (I attribute that score to nerves for breaking out the new swing in front of the guys). An 81 on day 2. And a 79 on day 3. I was no longer the worst golfer but up there in the top 5 of our whole group! As an added bonus, I finished the trip with a birdie on the 18th hole par 4 after smoking a drive down the middle and sticking a 120 yd approach shot to within 6ft of the pin).

The group could not believe the drastic change. One guy said I looked like I went straight from High School to the Pros and started calling me the White Mamba!

I have never done a testimonial, or a product review for anything before but somebody who can turn a 110 into a 79 in less than 3 months deserves a testimonial!" - Rick G.

"Hi Tom, I just wanted to share with you - I am a 14-16 Handicap( Index). I just played a social distance course in Wisconsin, I have been practicing your swing for a week in my basement and yard. I Just shot 88 - I hit the ball solid and I hit a draw (that never happens). I am sold, you are awesome. Thanks!" - Pat

"Hello Tom, I signed up for your on-line golf instruction yesterday. I recognized and corrected my takeaway wrist flipping issue and am already hitting the ball more consistently. Thank you!! I’ve had many lessons over the years. Your on-line program has by far been the best." -Laura

"I started working with SagutoGolf. This has been the greatest thing I have ever done. My iron distance is a little more than one club stronger and the accuracy is awesome. I am a 14 handicap and ever since watching the chipping and pitching videos and practicing the swing my handicap dropped to an 8 this month. How great is that?!" - Jim B.

So today we played River Hills in Little River.

Finally got a chance to get to the golf course and implement my Saguto Swing - just a few balls in warm up. Not even a practice session at the range.

Remarkable!!!! Nothing like it in 40 years of golf. Center of the fairway and longer than I have hit it in 10 years. Hit it one 292, at 57 that’s BIG. First time I have walked off the golf course with out back pain in 20 years. One swing key, shoulder under the ball. One move. Never thought I would see the high natural draw comeback.

What amazed most is the swing changes were able to be instantly made with a few balls in warm up.

I was a 3.6 handicap and truly thought I would never be back that low. I am confident I can get back lower. I never thought that was possible. - Dan R.

Hi Tom! Having great success with your teaching ... I've improved by 10 to 15 strokes over the last 4 months or so and it's a lot of fun to strike the ball now. - Marty L.

I just wanted to say BIG BIG THANK YOU Tom - I have been carefully following your Golf Swing Simplified course over the past month, applied each technique in order as per your perfectly structured training and breaking all my old habits. I've gone from double bogey each hole to pars and birdies and very occasional bogey (My handicap is dropping from 24 to 5 and continues to drop). This is coming from a person who has been at the course and simulators every day for the past 4 years and failed to improve consistently. For the first time, I no longer have pain in the ribs and lower back and its now the 3rd week I'm hitting each shot exactly the same as the next. I've paid and wasted literally thousands in training which got me nowhere, they would teach me something, it would work for a day, then back to zero. I'm so glad I found your course and I highly recommend to everyone, its the best $10 a month you'll spend in your life. - Mudassar K.

Last year, I was a triple-digit player. I joined Tom's golf school in September and this year I'm playing in the low 80s. You'll hit it straight, you'll hit it far, you will love your game. It works!!!! - Garry W.